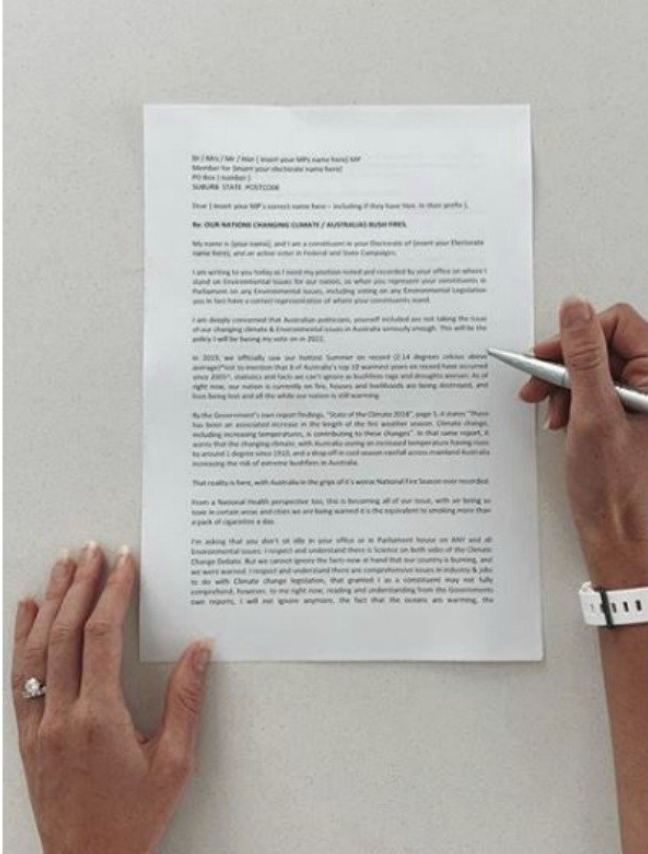 Feel free to copy, edit and send this letter to your MP. I have taken this letter from Anna Rose Richards who has worked in Federal Politics for many years and, with her permission, I have edited the original (which can be found on her instagram page) to include animal agriculture as an item that I believe requires legislative changes and new policy consideration. I strongly urge you to take this action – it requires only a minute of your time – and as Barack Obama said “Nothing can stand in the way of the power of millions of voices calling for change”.

My name is (your name), and I am a constituent in your Electorate of (area), and an active voter in Federal and State Campaigns.

I am deeply concerned that Australian politicians, yourself included are not taking the issue of our changing climate & Environmental issues in Australia seriously enough. This will be the policy I will be basing my vote on in 2022.  In 2019, we officially saw our hottest Summer on record (2.14 Degrees Celsius above average)* not to mention that 8 of Australia’s top 10 warmest years on record have occurred since 2005^, statistics and facts we can’t ignore as bushfires rage and droughts worsen. As of right now, our nation is currently on fire, houses and livelihoods are being destroyed, and lives being lost and all the while our nation is still warming.

By the Government’s own report findings, “State of the Climate 2018”, page 5, it states “There has been an associated increase in the length of the fire weather season. Climate change, including increasing temperatures, is contributing to these changes”. In that same report, it warns that the changing climate, with Australia seeing an increased temperature having risen by around 1 degree since 1910, and a drop off in cool season rainfall across mainland Australia increasing the risk of extreme bushfires in Australia.

That reality is here, with Australia in the grips of its worst National Fire Season ever recorded.  From a National Health perspective too, this is becoming all of our issue, with air being so toxic in certain areas and cities we are being warned it is the equivalent to smoking more than a pack of cigarettes a day.

Environmental issues. I respect and understand there is Science on both sides of the Climate Change Debate. But we cannot ignore the facts now at hand that our country is burning, and we were warned. I respect and understand there are comprehensive issues in industry & jobs to do with Climate change legislation, that granted I as a constituent may not fully comprehend, however, to me right now, reading and understanding from the Governments own reports, I will not ignore anymore, the fact that the oceans are warming, the temperatures are rising, and Australia is burning. And if we don’t all do our part, both legislatively and personally to reduce Greenhouse Gas Emissions, based on that same report, this Fire weather will continue to become more frequent and severe.

We were warned, and we are still being warned. We now must act.

I am asking you to lead. I am asking that you stop thinking that the changing Climate is not Australia’s problem, because we can do so much better as a nation.

One if the issues that has also been ignored for far too long is the impact that animal agriculture is having on the environment.

In 2019, the Lancet also published an article proposing that we reduce production of livestock as a measure to improve sustainability, reduce global warming and improve health. “A diet rich in plant-based foods and with fewer animal source foods confers both improved health and environmental benefits.”+

On the subject of deforestation, the G2O report states that Australia is the only developed country that is a “deforestation hotspot”, but has no policies to tackle it.  70-75% of deforested land is used to grow monoculture crops to feed livestock.

These issues cannot be ignored.  The fate of humanity lies in the leaders of countries hands.

I trust as a Member of Parliament you are in fact doing your very best when it comes to representing us, your constituents, but I am asking as a voter, in 2020 for you to do better. To do all you can to promote strong cuts to our carbon pollution, to even create the legislation on how to do that from an industry perspective if you don’t believe that legislation exists yet as a matter of urgency.

I look forward to receiving a reply from you on this matter.